Well, what a few days we’ve had! The ferry was horrendous, as expected…but we survived!

On our first day, we went to explore Sairee beach, which was conveniently a few minutes away from our hostel, Amonrada House.
It’s a lovely beach, white sands, turquoise waters. Unfortunately there was quite a lot of rubbish along the waters edge, which spoiled it a little but we wandered up the long stretch of sand until we found a good spot. 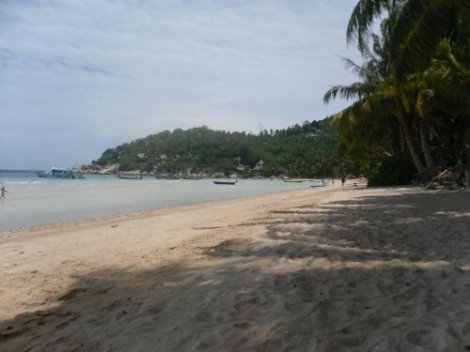 After quenching our thirst with what is now my current favourite drink: mixed fruit shake/fresh coconut shake (basically fresh fruit blended with ice!) we sunbathed for a while before having a swim. The water was quite wavy because we are at the South of the island, apparently it is much calmer elsewhere.

The next day, we booked ourselves onto a boat trip for the following day and did much the same as the day before, with one difference…we were swimming in the afternoon and suddenly I felt an electric shock-like pain on my wrist. I quickly got away from where I had been but it was agony! I knew it must have been a jellyfish but couldn’t see anything, it was still so wavy. My wrist felt like it was on fire! I quickly evacuated the sea and went to pour water on it and assess the situation…now I had a shockingly white blob on my wrist, surrounded by sunburn-pink blotches – argh! I didn’t really know what to do then…no, I didn’t ask Kim to wee on my wrist, in case anyone was wondering…I headed along to a beachfront bar and asked their advice. They had none. They pretty much just confirmed that it was a jellyfish sting and said there was nothing I could do. The pain had subsided now to a kind of constant stinging nettle pain…so I just had to grin and bear it. I bought myself another shake and settled down with a book to distract myself, The Book Thief was my book of choice and for the most part, it did take my mind off the pain.

So, putting that drama aside…we had an evening of Muay Thai ahead of us! Eek! Neither of us have ever watched boxing or fighting before so we didn’t really know what to expect. 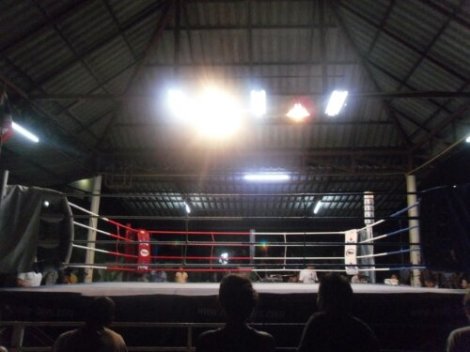 What we didn’t expect was that there would be kids doing it too! It was horrible to watch them with such angry looks on their faces, trying to beat the crap out of each other!

Before it started, we all stood up for the Thai national anthem and before we knew it, it was fight time! At the start of every match, a traditional song is played and the players walk around the ring, pausing in the corners for a few moments each time, most times, the fighters prayed to each direction before the match too.

Then, there are five rounds (although, two of the six fights we watched didn’t get that far!) and it gets going pretty quickly after a bit of squaring up/scowling at each other! When the young boys were fighting, they were so small that on two occasions, they nearly fell out of the ring together! Fortunately, there were loads of people around to shove them back in! At the end of their match, the losing fighter was carried off by his Dad! There was quite a variety of fighters, small ones, Brazilian ones even a British one who defeated his opponent in two rounds! We couldn’t understand the commentator so we called this guy Dave.

So we had quite a late night soaking up the culture!

The next day we were up early for our boat trip. We were picked up in a kind of hybrid truck/tuk tuk thing, hanging on yet again for dear life! Then when we were at the pier, we clambered over 4/5 other boats before finally arriving at ours. Once onboard, those who needed to, borrowed snorkels and masks and then we were off!

Our first stop was Shark Bay, so called because well, its a good place to see sharks, black tip sharks (I think!). I didn’t see any but it was quite rough there and I had mask trouble! The next stop was much calmer and had amazing coral and an incredible array of fish! It was like Finding Nemo! We stopped at two other snorkeling areas and each time were thrilled by the amount of fish! I took some photos with an underwater camera, goodness knows what they will come out like but hopefully there’s a good selfie in there!

Our last stop was an island called Koh Nangyuan, a beautiful island very close to Koh Tao. The beach was really white but the sea was filled with coral! We had two hours to ourselves to chill out so we did a bit more snorkelling! 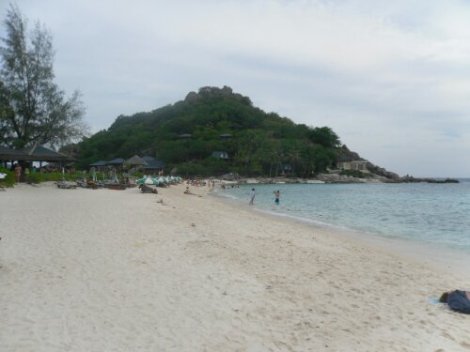 We took a while to adjust to being back on land afterwards but had a really lovely day! We are off to Koh Lanta tomorrow, its going to be a long journey but we’re looking forward to going to the other side of Thailand and going to The Beach– beach in Koh Phi Phi!